A Sin for Freedom
Eboni J. Dunbar
And what was I? The only difference between us was that I had repented.
What the Mountain Takes, What the Journey Offers
Jae Steinbacher
When my lover gets the Burning, I prepare to go to the Binding Place, where the mountain meets the sea. Even in her delirium, she smells the offering meal cooking and sees my half-full pack. She begs me not to go. It’s a journey lovers and pilgrims take—to exchange vows or to petition Mother. The paths to the mountain shift with their travelers’ intentions, and we were much younger when we traveled there to be wed. I squeeze her hand. “I can’t stay and watch you fade.” There’s only one certain cure for the Burning. If I don’t go, Menrie...  Read more »
Recent Comments
Issue #342
Size / Zoom 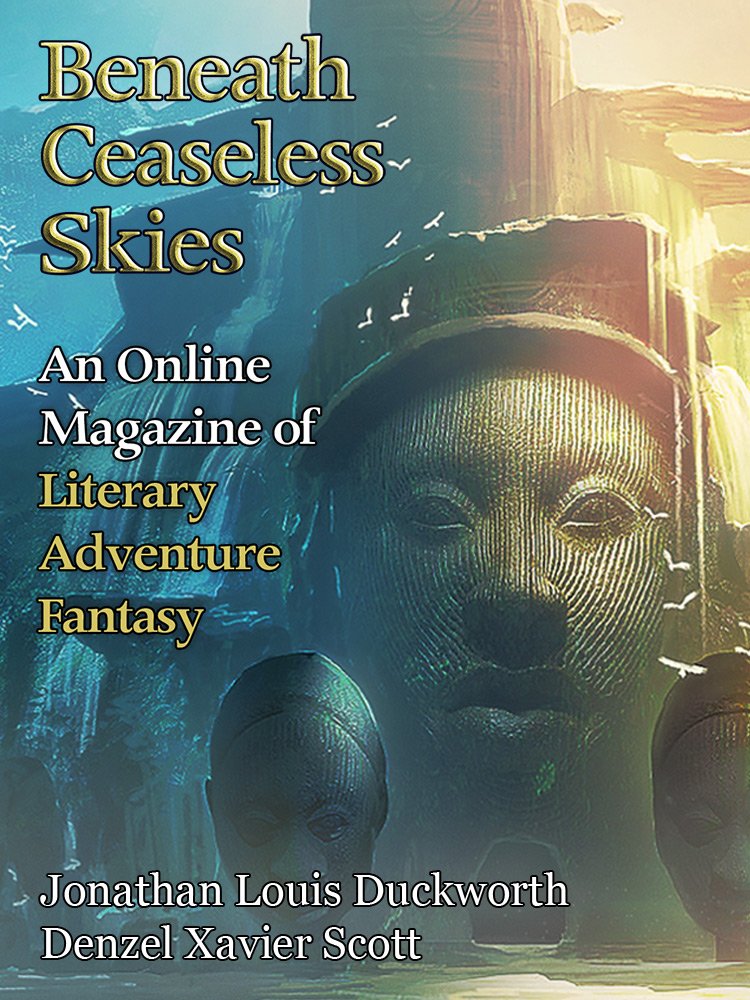 Tadie had never seen witchspawn, but she had heard their hunting screeches beyond the trees; sounds like children in pain. Master had told her that witchspawn were children once, girls like her who felt the Itch and gave in. The Itch that made clothing unbearable, that made children scratch themselves bloody, that made them ravenously hungry. Last harvest, it had been Kyla, a girl three seasons her elder, who’d gotten the Itch and ran away. Usually the Fold spotted it before that—usually children with the Itch were taken and Unsaid before they could turn.

Unless Tadie didn’t let him. She stepped a pace back and pulled Loyd with her, away from Jessen.
The Black Rainbow
Denzel Xavier Scott

Eventually their nexian corpses, smelling sweetly with a scent like cardamom, fennel, nutmeg, star anise, cloves, allspice, and cinnamon combined, caught fire as they always do once the inevitable changes of decay have rooted themselves in nexian flesh. I removed the fireproof shiro all nexians use for bedding so that the flames of their corpses would eat the orphanage in the night. I wanted to burn in the fire of my beloveds, but the voices that attack my mind wouldn’t let me, and so I flew through a second story window into the ash-colored trees of the surrounding Serenblen.

With their lives, their yah, devoured into the chasm of my hunger, I snatched out each of their eyes as carefully as I could.
Audio Fiction Podcast:
No Say
Jonathan Louis Duckworth

Unless Tadie didn’t let him. She stepped a pace back and pulled Loyd with her, away from Jessen.
Audio Vault:
Rivers Run Free
Charles Payseur

Introduced by the author, in an interview conducted and engineered by M.K. Hobson, explaining the story’s element that oppression can link people together and can tear people apart.
From the Archives:
The Sweetness of Honey and Rot
A. Merc Rustad
Jiteh lets her hand hover a breath away from the Boundary. Somewhere beyond, there are people who do not watch their brothers devoured by the Life Tree. There are people who do not praise.
text