A Sin for Freedom
Eboni J. Dunbar
And what was I? The only difference between us was that I had repented.
What the Mountain Takes, What the Journey Offers
Jae Steinbacher
When my lover gets the Burning, I prepare to go to the Binding Place, where the mountain meets the sea. Even in her delirium, she smells the offering meal cooking and sees my half-full pack. She begs me not to go. It’s a journey lovers and pilgrims take—to exchange vows or to petition Mother. The paths to the mountain shift with their travelers’ intentions, and we were much younger when we traveled there to be wed. I squeeze her hand. “I can’t stay and watch you fade.” There’s only one certain cure for the Burning. If I don’t go, Menrie...  Read more »
Recent Comments
Issue #348
Size / Zoom 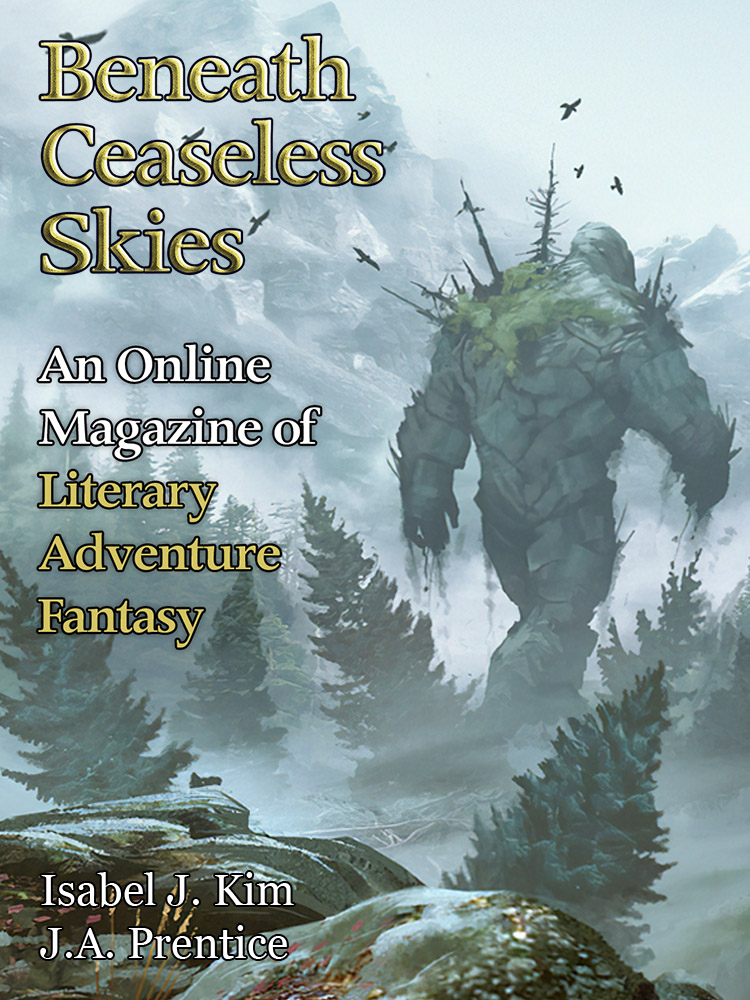 Emmanuel 7.18 finds himself a glorified errand-boy, hauling the local riverbed clay up from the basement where it is kept cool and wet in sealed containers. It's more physical labor than he’s used to while on his Debt, but he finds he doesn’t mind. It reminds him of being home—when he’s home with his batch-sibs, he’s the default heavy lifter. He has two good arms and no gash in his chest.

The godmaker smiled pleasantly and made his way home quickly as he could. He shut the doors of his shop and lay in his bed, telling himself again and again about the power of coincidence. Belief did strange things to the mind, made patterns appear where there were none, made three incidents seem a certainty. He was a craftsman, nothing more. He sold icons and idols, nothing more. “I cannot make gods,” he said, though there was nobody to hear him.

There was silence in the workshop, and for a terrible moment, he was afraid he would receive an answer.
Audio Fiction Podcast:
Godmaker
J.A. Prentice

There was silence in the workshop, and for a terrible moment, he was afraid he would receive an answer.
From the Archives:
The Gods Come to Sredna
T.S. McAdams
Like the log stockades of Sredna, it would hold a ceratopsid until she decided to leave.
text