A Sin for Freedom
Eboni J. Dunbar
And what was I? The only difference between us was that I had repented.
What the Mountain Takes, What the Journey Offers
Jae Steinbacher
When my lover gets the Burning, I prepare to go to the Binding Place, where the mountain meets the sea. Even in her delirium, she smells the offering meal cooking and sees my half-full pack. She begs me not to go. It’s a journey lovers and pilgrims take—to exchange vows or to petition Mother. The paths to the mountain shift with their travelers’ intentions, and we were much younger when we traveled there to be wed. I squeeze her hand. “I can’t stay and watch you fade.” There’s only one certain cure for the Burning. If I don’t go, Menrie...  Read more »
Recent Comments
Issue #349 – Science-Fantasy Month 6
Size / Zoom 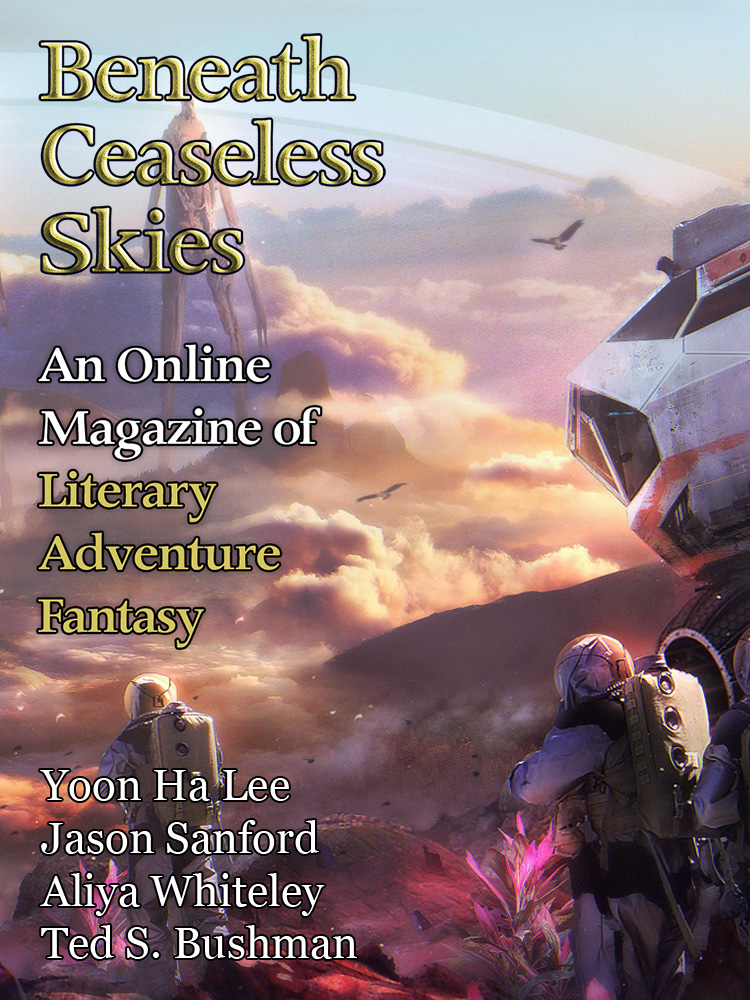 Today Kei tended the three that had been given to her care in her first year. If she did well—if the bonsai starships matured into acceptable usefulness—she would be initiated; she would join the shrine's priesthood.

That dying anchor said some mysterious ‘he’ was looking for her. Chakatie tried to think of who that could be. When she’d been an anchor in charge of her own land, she’d thought she’d been even-handed. But traveling with the day-fellows had revealed to her the painful reality of being on the receiving end of the grains’ anger and punishments—pains she’d once inflicted on far too many people to count.

Chakatie had figured that’s what the grains would demand.
Rich Growth
Aliya Whiteley

But now, as I age and see the beginning of personal withering, I find I want to know that this patch will be tended once I lie down and die. So I’ve saved enough for a child of my own. Thirty gemflowers. There must surely be somebody out there who will exchange their own treasure for such a fortune.

Let this growth be the start of a stalk that reaches the roof of the dome and spreads its seeds across the high jeweled panels.
Burying the Seeds of Spider Gods
Ted S. Bushman

“We are not afraid,” said one man with greying hair—I remembered him as a younger man, wielding an axe that had severed my legs from my body. “But the seasons have grown harsh. There is not much food.” The silence that followed served as grim confirmation.

I looked down at the seeds. In my head the voices of my caretakers suddenly rang.
Audio Fiction Podcast:
Bonsai Starships
Yoon Ha Lee

The third bonsai swayed to the bleak tides of distant and colliding black hole inspirals.
From the Archives:
Blood Grains Speak Through Memories
Jason Sanford
Even though the chilled spring day promised nothing but beauty, the grains in Frere-Jones's body shivered to her sadness as she looked at the nearby dirt road.
text