A Sin for Freedom
Eboni J. Dunbar
And what was I? The only difference between us was that I had repented.
What the Mountain Takes, What the Journey Offers
Jae Steinbacher
When my lover gets the Burning, I prepare to go to the Binding Place, where the mountain meets the sea. Even in her delirium, she smells the offering meal cooking and sees my half-full pack. She begs me not to go. It’s a journey lovers and pilgrims take—to exchange vows or to petition Mother. The paths to the mountain shift with their travelers’ intentions, and we were much younger when we traveled there to be wed. I squeeze her hand. “I can’t stay and watch you fade.” There’s only one certain cure for the Burning. If I don’t go, Menrie...  Read more »
Recent Comments
Issue #364
Size / Zoom 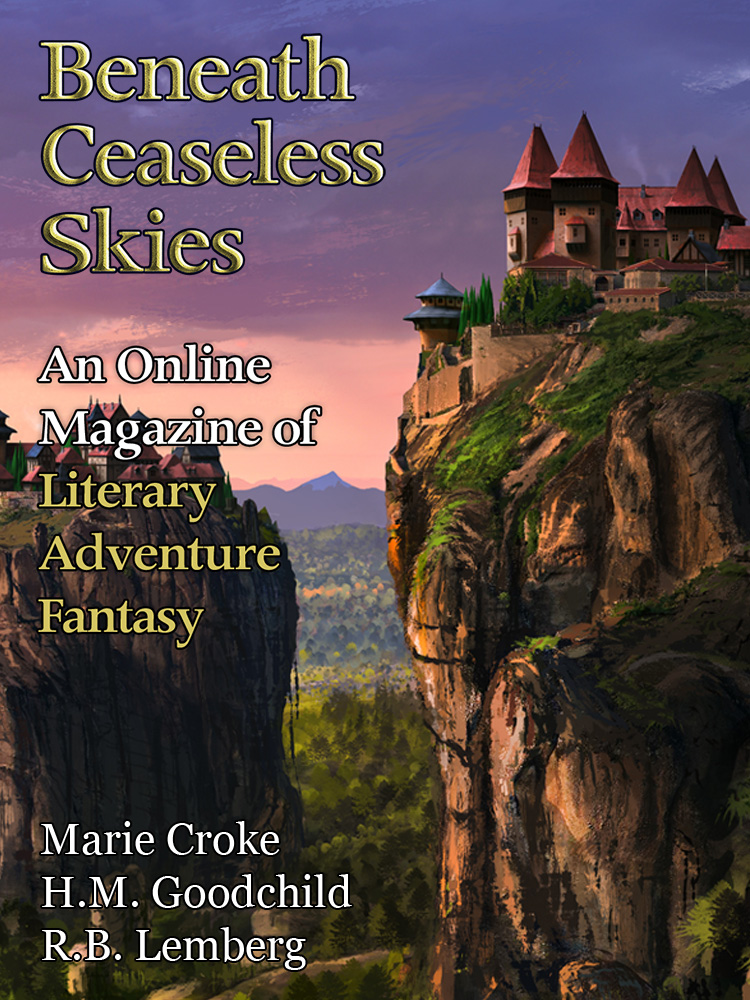 Featuring an interview with BCS author R.B. Lemberg by Jaymee Goh, a new episode of the BCS Audio Vault podcast—R.B. Lemberg’s five-hour audio novella “A Portrait of the Desert in Personages of Power,” introduced by the author—and a giveaway for a copy of R.B.’s new Birdverse novel, The Unbalancing.

Turn To Stone Ourselves
Marie Croke

Reminding me of another little girl centuries before, one who had grown up to claim her youth-name, her adult-name, and finally her elder-name, yet who had never been quite content with any of those names, nor what they represented. Not until her hands turned to stone-care.

Could I taste the inklings of my first life, when flesh had ruled me rather than stone?
Upon The Land
H.M. Goodchild

On any other day, Varthin and I would not have met. His was a world of fire and iron and light everlasting; mine of the cool depths and a dark that was no dark at all, mapped by the subtle changes in taste and temperature and pressure of the saltwater that was my element. But it chanced I passed the tideline on midsummer’s day when Varthin stepped beyond his door into much light and little darkness, and so we met within the marram. His life was twined from its golden light; its black iron gave him his strength. These gifts he offered with his ring, and freely.

And so I did, sealing half my life into the stone kist outside his door.
Author Interview: Queer Norms and Sexualities in R.B. Lemberg’s Birdverse

In conjunction with the release of BCS author R.B. Lemberg's new novel The Unbalancing, Jaymee Goh of Tachyon Publications, the publisher of R.B.'s novella The Four Profound Weaves (2021) and The Unbalancing (2022), interviews R.B. about queer norms and sexualities in their Birdverse fantasy world, which is also the setting for R.B.'s five stories, novelettes, and novella that appeared in BCS.

An interview with author R.B. Lemberg about their Birdverse fantasy world, the setting of their stories in BCS and their forthcoming novel The Unbalancing.
Audio Vault:
A Portrait of the Desert in Personages of Power
R.B. Lemberg

Introduced by the author, explaining elements of the Birdverse world and culture and characters that appear in the novella and how one of the characters connects with the new Birdverse novel The Unbalancing.
From the Archives:
A Portrait of the Desert in Personages of Power, Pt. I
R.B. Lemberg
Across great distances I hear her voice rolling over the sand, traipsing gently above bones of impossible beasts that perhaps had one day populated the desert.
text