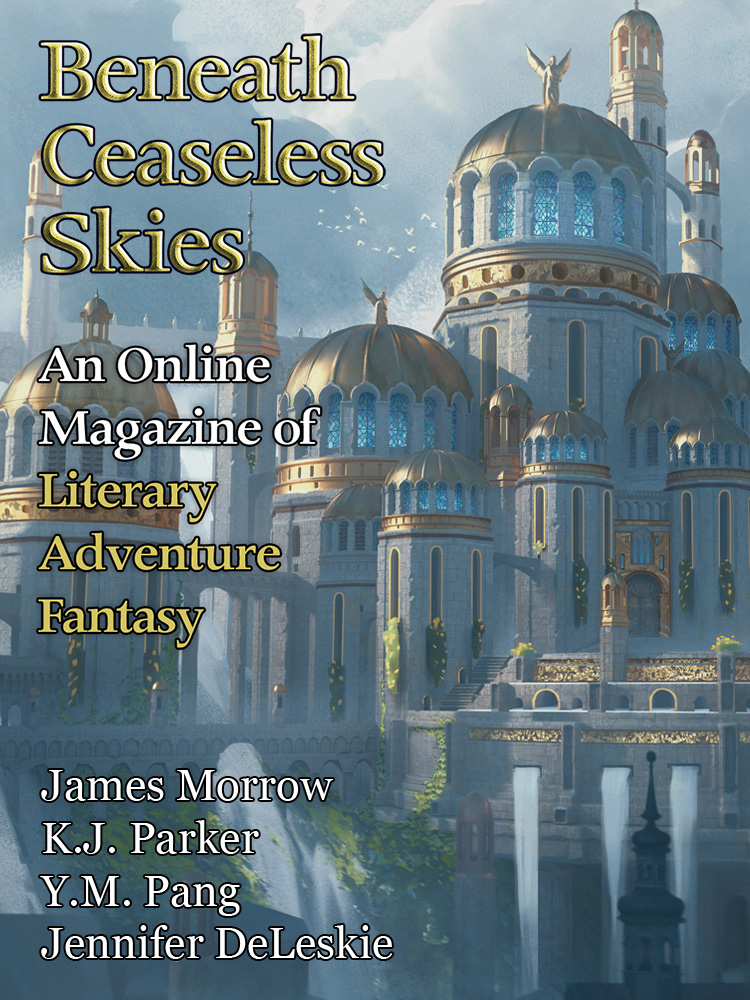 Fire and Brimstone in the Twin Cities
James Morrow

“Before God subjects Nahilia’s people to bitumen and brimstone,” says Luther, ignoring the question, “I must apprise them of the reasons for His wrath. Tell me, does any Sodomite myth turn on a primal act of disobedience? Is there a story involving forbidden fruit or a lost paradise?”

The sea is a remarkable thing. Nobody owns it. It'll kill you if you give it half a chance, but it'll take you anywhere you want to go. It can turn a nobody like my father into a person of consequence. You can rob other ships, murder people and throw them over the side, swoop down on cities and steal and slaughter to your heart's content, and nobody will come after you, because of jurisdictional issues. The sea isn't a place, it's a state of mind. The sea is freedom.

Try thinking about it, the Archer God had said, so I did.
The Mountains My Bones, the Rivers My Blood
Y.M. Pang

“Oh please, now you’re being sappy. Where’s the dignity of the God of Ash?” Armind gestured to the earlier panels, moonlight etching the lines of lean muscle on his arms. “The forms you took in those battles, can you still adopt them?” Shun forced himself look at his guises in the paintings. The golden gryphon he’d assumed when facing Rorinn. The six-armed titan he’d been at Mount Tizen.

Shun closed his fan with a gentle snap. “She sent you to my world despite knowing what I am. She sent you to die.”
But Mayflies on the Water, Gazing at the Sun
Jennifer DeLeskie

When I awoke in the morning, the temple was in turmoil. The oxen lowed and stamped their feet, and the peacocks shrieked and plucked the inlaid silver and lapis lazuli from the walls. I found the priests Lamentation and Butter Tub under the date palm, slaughtering a sheep. “Calamity!” Lamentation cried, poking at the sheep’s entrails. “Calamity and devastation!”

When I awoke in the morning, the temple was in turmoil.
Audio Fiction Podcast:
Fire and Brimstone in the Twin Cities
James Morrow

Try thinking about it, the Archer God had said, so I did.
From the Archives:
The Gods Come to Sredna
T.S. McAdams
Like the log stockades of Sredna, it would hold a ceratopsid until she decided to leave.
text