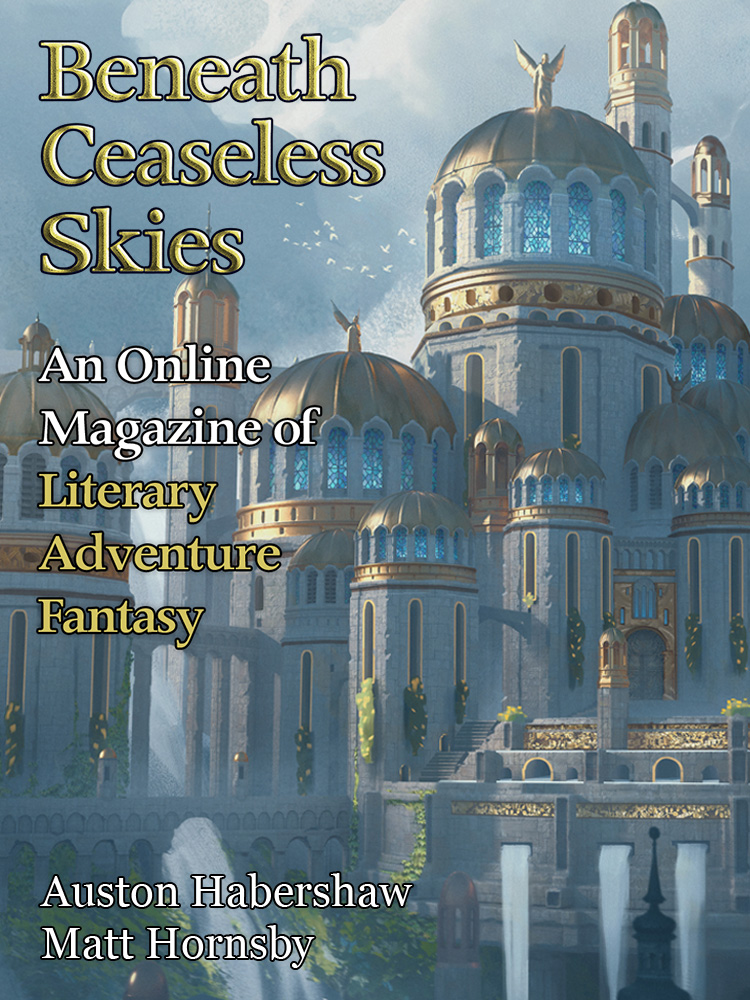 The cards were crisp, almost brittle in Cédric’s hands; he ran his thumbs along the corners as he shuffled, feeling where he’d marked them during the game with the same needle in his ring he’d used to draw the blood to let him keep gambling. It all came down to this hand, this moment. The moment he was going to cheat the dead at their own table.

The cards were almost brittle in Cédric’s hands; he ran his thumbs along the corners, feeling where he’d marked them.
The Law of Sustenance
Matt Hornsby

At that moment I experienced nothing less than a revelation, a moment at which Heaven’s intentions, normally concealed from humankind, are laid bare and perceptible. It was, undoubtedly, the divine that had guided me to that glade of Widow’s-Gown, and from there to Alessa’s house, and would lead me hence to Multzep, where I would fulfill my destiny. My only purpose in life was to wed my cousin Halime. I adored her, and our marriage was Heaven’s design; I had been told as such by a great sage.

There were rumours of another suitor sniffing around, a dull-witted stonemason from Kessir, and I feared that if I did not find the money, I would be beaten to the post.
Audio Vault:
The Thought That Counts
K.J. Parker

Introduced by audiobook and podcast narrator Heath Miller, who narrated the original BCS Audio Fiction Podcast of the story.
From the Archives:
The King in the Cathedral
Rich Larson
“How disappointing I must seem,” he said at last. “I didn’t know I’d become a folk figure. I would have grown a great beard.”
text