A Sin for Freedom
Eboni J. Dunbar
And what was I? The only difference between us was that I had repented.
What the Mountain Takes, What the Journey Offers
Jae Steinbacher
When my lover gets the Burning, I prepare to go to the Binding Place, where the mountain meets the sea. Even in her delirium, she smells the offering meal cooking and sees my half-full pack. She begs me not to go. It’s a journey lovers and pilgrims take—to exchange vows or to petition Mother. The paths to the mountain shift with their travelers’ intentions, and we were much younger when we traveled there to be wed. I squeeze her hand. “I can’t stay and watch you fade.” There’s only one certain cure for the Burning. If I don’t go, Menrie...  Read more »
Next Issue
Coming Soon:
Issue #375 — Feb. 9, 2023
A Forcible Calm
Jonathan Olfert
All four were Brothers of Dule, magicians of a shared heritage and shared interests, her enemies—and yet there might be fissures.
Behind Space, Between Stars
C.S. Marten
When the Walker arrived to collect the world’s heart, someone else was already there.
Recent Posts
Recent Comments
Categories
BCS Audio Vault 035, Exclusive Early Release for BCS Patron Supporters
Posted in: by Scott Andrews 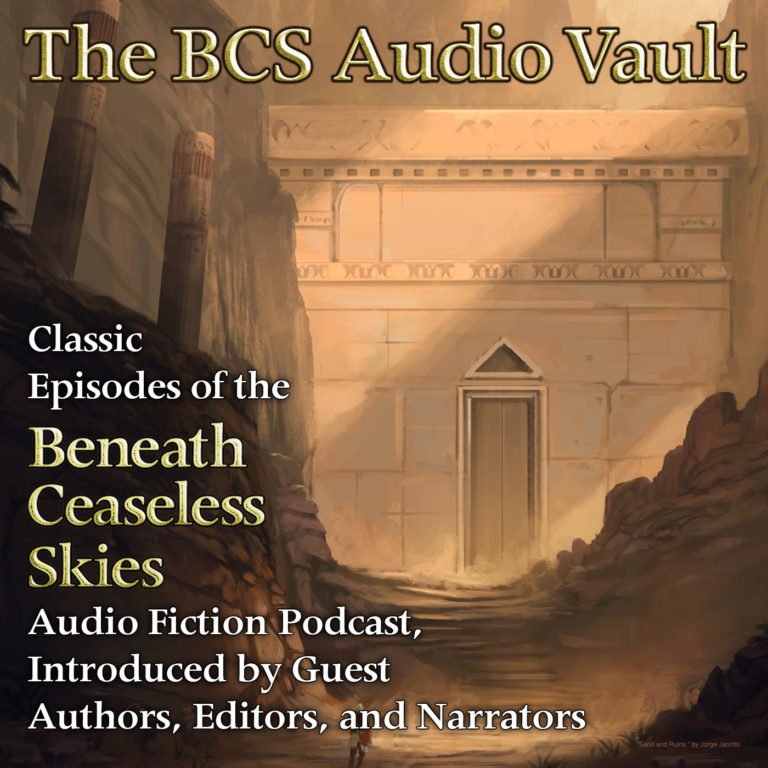 BCS Audio Vault 035 is “The Angel Azrael Delivers Small Mercies” by Peter Darbyshire, from BCS #102 back in 2012. It’s introduced by the author, explaining the genesis of the Angel Azrael character–who has appeared in four stories in BCS, including “The Angel Azrael Encounters the Revelation Pilgrims and Other Curiosities” in BCS #351–and his horror-influenced Weird Western world, and the personal bibles in that world.

Thank you for your support of the BCS Patreon!